Comic books can be convoluted at times. What characters are involved, what did or didn’t happen, it can be confusing. Rarely does the secret identity of a character present a problem. Bruce Wayne is Batman. Clark Kent is Superman. Oliver Queen is Green Arrow. Firestorm is, well, it’s complicated.

Premiering in Firestorm: The Nuclear Man #1 (1978), Firestorm is the creation of Gerry Conway and Al Milgrom. High School student Ronnie Raymond, in an attempt to impress a girl, joins an activist group, protesting against the local nuclear power plant. The leader of the group, Eddie Earhart, intends on destroying the plant, using Ronnie as a patsy. When the group break in that night, Ronnie tries to stop Eddie, and is knocked unconscious. Professor Martin Stein, who was working late, was also knocked out. Ronnie awakens before the explosion, trying to drag the unconscious professor with him. The two are caught in the blast, fusing them together inside the Firstrom matrix as the hero, Firestorm.

The conceit is clever. The two fuse together to create the hero, with Ronnie piloting and Stein able to speak and guide Ronnie, as he was unconscious in the explosion. Firestorm can manipulate any object, able to molecularly alter its structure, changing it to whatever he chooses. Like Green Lantern, Firestorm can only transmute objects he understands. With Stein’s scientific mind able to provide this information, the two make a good pair, battling villains like Multiplex and Killer Frost (foreshadowing!). 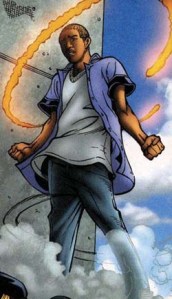 Pretty straight forward, no? It was, (feel free to skip this paragraph) until Prof. Stein became ill, and was replaced by Mikhail Arkadin, until Stein came back, taking over completely and kicking those two to the curb. Then Ronnie became Firestorm again, by himself, then died, with teenager Jason Rusch being handed the powers, because. Oh, and Firestorm isn’t some science creation, he’s a Fire Elemental, and holds one quarter of the life equation. Then he bummed around space in 52. Ronnie came back in Blackest Night, absorbing Jason and killing his girlfriend. They were stuck as Firestorm during Brightest Day, fighting constantly. Then the New 52 happened. Now it’s just Ronnie and Jason. Both playing a larger part in New 52 Futures End. Oh, and someone named Mick Wong was in there for a while.

If you made it through that, congratulations. They should change his name to Firestorm: The Convoluted Man. Get it?

Despite having his own series on a few occasions, Firestorm has mostly be a C-level character, only succeeding when part of an ensemble. Firestorm’s had a few animated appearances on Batman: The Brave and the Bold, and Justice League Unlimited. Outside of that, Firestorm, the original Ronnie / Stein version, is on The Flash (2014). Robbie Amell (brother of Stephen Amell – Arrow), will portray Ronnie with Victor Garber as Dr. Stein. Robbie’s girlfriend on the show is Caitlin Snow, AKA, Killer Frost. dun Dun DUN!

Firestorm is a neat character when boiled down to basics. Most iteration have focused too much on the character’s relationships, needless complicating matters rather than giving him/them external conflicts or adventures. The books written by Conway are fun, otherwise, don’t go seeking them out.

What’s your favorite Firestorm Adventure? Can you keep up with all these roster changes? Comment below.

The Blackest Night thing confused the hell out of me.

Friends of the Credible Hulk

I own no images featured on this site. Other than my own opinions represented here, none of the material is of my own creation. All rights are retained by the original copyright holders. This is a non-profit site.